A straightforward route to the summit of Dumyat (418m / 1371ft) from Pendreich Forestry car park. It is the westernmost peak in the Ochils and on a clear day offers incredible views down to the city of Stirling, the River Forth and across to the Southern Highlands. 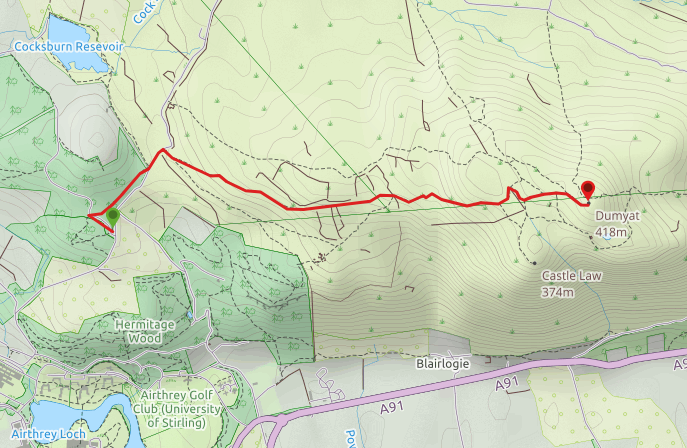 Route:  At the car park look for a tall wooden way-marker pointing out the footpath to Dumyat Hill. It leads you through the woods and out onto Sheriffmuir Road. Turn left and walk along the road a short distance, looking out for a metal gate on your right leading onto the open hillside. Follow the obvious earth and grass footpath uphill in an easterly direction. After crossing a stile keep left to follow the track uphill, reaching the summit after 0.4 miles.  Descend via the same route – total distance is 4 miles.

My sister and I had been trying to arrange a date to bag this hill for a loooooonng time! The sort of planning that goes like this…. “We will need to organise a day to do Dumyat” (pronounced “Du-my-at” and not “dumb-yat” as I called it for years!)…. “Yeah I know, I’ll check when I’m free“……No mention of it for a few months. And repeat. For 7 years! I don’t even know why; we both wanted to do it to an equal extent. It was simply a case of life getting in the way.  Did I mention that my sister can literally see the Ochils from her kitchen window?? It is a ten minute drive from her house to the car park! Shocking…..

Louise & her husband had been amusing my kids for the weekend during the summer holidays and I was going to make the hour drive north from Ayrshire to pick them up. The weather was good so we took the bull by the horns and decided today was the day. Kids too.

Arriving at the car park, my eldest went into a proper sulk about the size of the hill. Apparently it was too small! He was by no means a seasoned hill walker, having only bagged Loudoun Hill (316m) and Conic Hill (361m) in his short 5 years. So what made him consider Dumyat (418m) as “teensy” I have no idea. What cracked us up the most was that half a mile into the hike he made a massive u-turn, declaring it to be too big and suddenly a mysterious sore foot brought him to a standstill. Several adjustments and a bit of bribery later and he was still whining about it. He was even starting to convince us that it might be the truth! Louise offered him a piggyback and suddenly the sore foot was forgotten.

The hillside was awash with a sea of beautiful purple heather at this time of year and being a clear day we were spoiled with panoramic views: The Wallace Monument, Stirling Castle, the snaking River Forth. A personal highlight for me was the bird’s eye view of Stirling University campus where I attained my degree many moons ago. What a place. It got me to wondering how it had been possible for me to live in this part of the country for 5 years and not have been up here before! I was obviously not as adventurous back then, or perhaps it had more to do with the 50p vodkas on offer…..

As we reached the summit and took the usual selfies, we could see rain clouds on the horizon blowing right towards us at quite a pace. We knew we’d never make it down before it caught us, so full waterproofs were donned and now with an empty rucksack we started the descent. Within minutes we were in the midst of a full on downpour – I had Nathan by the hand and we were literally jogging down (sore foot long forgotten) and Louise had Thomas on her back (more for speed than anything else) Despite only lasting 15 mins or so, the rain gave us a good drenching and I giggled at the memory of Louise asking me if I had any sunscreen or sun hats with me for the boys when we had arrived at the car park. I remembered feeling like a terrible mother, having not even thought of packing either item despite the obvious sunny day. The irony being that instead I had a rucksack full of waterproofs with me.  Well, as it turns out, mum did good 😉

Check out my other walks in the Stirlingshire area >> HERE

#beaches #coastalwalks #westcoast #Ayrshire #Ayrshirecoast #sandybeach #groupwalk #walkwithfriends #goexplore #scotland #ycw2020
Maidenhead Bay looking divine in the sunshine today 👌 #coastalwalks #beaches #scotland #ycw2020 #Ayrshire #ayrshirecoast
Well done to everyone who did my Culzean-Maidens walk today as part of the Walk Yer Socks Off event at Culzean Castle and Country Park! Huge thanks to EnRich Outdoors and Elaine Ross for helping out as walk leaders. Thank you also to John of Maidens Harbour Trust for sharing some fascinating history and tidal information with our group. I hope you all enjoyed it as much as I did!
Snow filled clouds make for a very dark sky! Caught in a blizzard shortly after this was taken. #snowydays #snowclouds #blizzard #contrast #windfarm #turbines #winterwonderland #winterwalks #snow #darksky #whiteleemoments #whitelee
The world inside an emergency shelter looks very.... orange ! Having lunch inside one of these was a first for me and much hilarity was to be had! Couldn't believe how grey the world looked when we came back out, and how feeeeezing cold the wind was! Have you tried one?? #funonthehills #shelter #notanemergency #practicemakesperfect #sherpaadventuregear #cosy #veggielunch #hummus #bread
Foggy days in the Scottish Hills. Brilliant day near Moffat walking the Hart Fell ridge this week with @outdoormor practicing navigation skills 👌 #scotland #fog #scottishhills #outdoordays #getoutside #moffat #hillwalking #girlswhohike #navigation #osmaps #noview #challengeyourself
Advertisements
%d bloggers like this: