East Renfrewshire has a lot to offer the walker and this circuit shows off some of it’s best bits! Duncarnock Fort (known locally as The Craigie) is a craggy hill (204 m / 669 ft) which stands invitingly on the banks of Glanderston Dam. Pausing on the summit of what was formerly an iron age fort, take a moment to wonder about it’s history and all that may have happened here many years ago! On a clear day, just as Mary Queen of Scots is rumoured to have done, you will enjoy panoramic views over greater Glasgow extending to the Campsies in the north. The route to the dam and the hill track can both be very boggy but the remainder of the walk is along surfaced minor roads and through the village of Neilston itself.  (Note on last visit there was one locked gate which needed to be climbed).

Route: From Neilston Railway Station turn right onto High Street. Walk along here, turning left into Kirkton Road and continue along the quiet single-track road through peaceful countryside. The road bears left past Loanfoot Farm then passes a few cottages to reach the junction with Springhill Road. Cross Springhill Road, go through a gate into a field. At first there is a track but this soon wears out and there is no obvious path to show the way but you are aiming to get to a gate at the bottom of the field, at the opposite side to where you are. If you head left off the track and down over the field towards its far right-hand corner you should find the gate. Go through the gate and descend to a fisherman’s bothy beside Glanderston Dam with The Craigie ahead then turn left and walk along a track. Go through a gate on your right before reaching the road, and follow a grass embankment above the dam. At the end of the embankment descend left, cross a footbridge then turn right to walk alongside a row of hawthorn trees keeping them on your right. After the last tree bear right. Walk towards a wooden stile at a wall, cross the stile and turn left, following an uneven path below The Craigie. As the path begins to climb turn right at a fork and ascend the steep slope to reach the summit. Descend via the same route and retrace your steps. Before reaching the fisherman’s bothy turn right to emerge onto a minor road. Turn left to reach Glanderston Road, keeping left to stay on Glanderston Road all the way to Springhill Road. Turn right and continue along Springhill Road to a crossroads. Turn left onto Springfield Road. Eventually you will reach a roundabout where you continue straight ahead onto Kirktonfield Road. At the road end turn left onto Neilston Road. At Neilston Parish Church turn left onto High Street and continue along to reach Neilston Railway Station.

Nicola and I tend to have our catch ups during a walk these days so when she sent me a link to a leaflet containing 10 walks in East Renfrewshire we got a date in the diary, picked a route and went exploring! I had never been to Neilston before and the drive in from Ayrshire on our chosen date was somewhat precarious owing to black ice on the surrounding country roads. As a result I was a little late arriving and found Nicola waiting patiently in her car for me….. and her walking boots which had been left at home and would be arriving within the next 20 mins via direct courier otherwise known as her husband 😀 So we had our catch up in my car while we waited! The boots arrived and off we set.

The first part of the walk took us over high ground along quiet country roads. We passed several farms and enjoyed views across to the snow-capped Campsie Fells as we went. 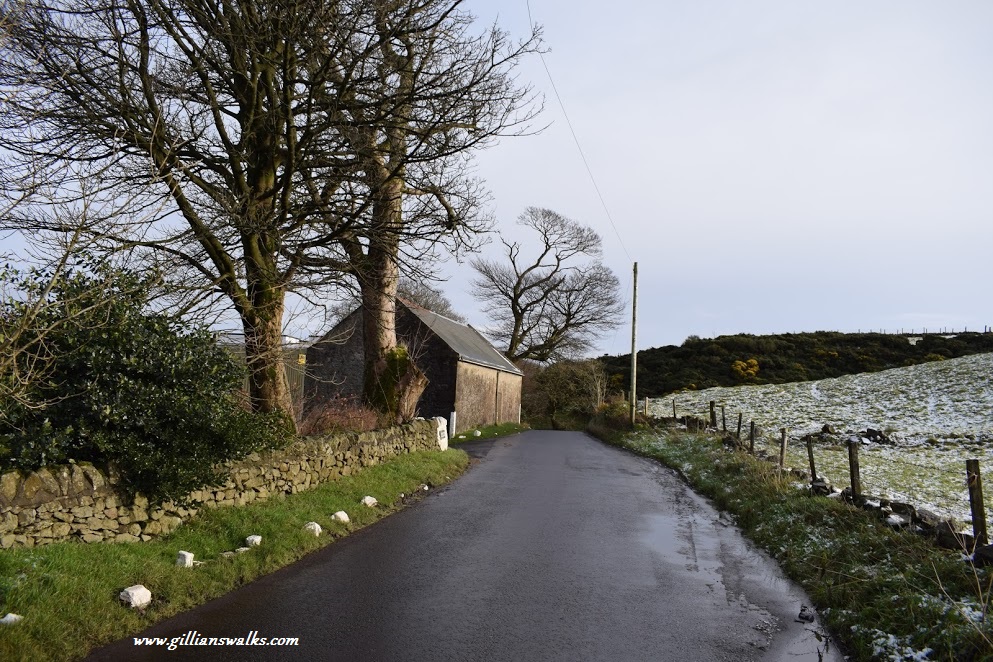 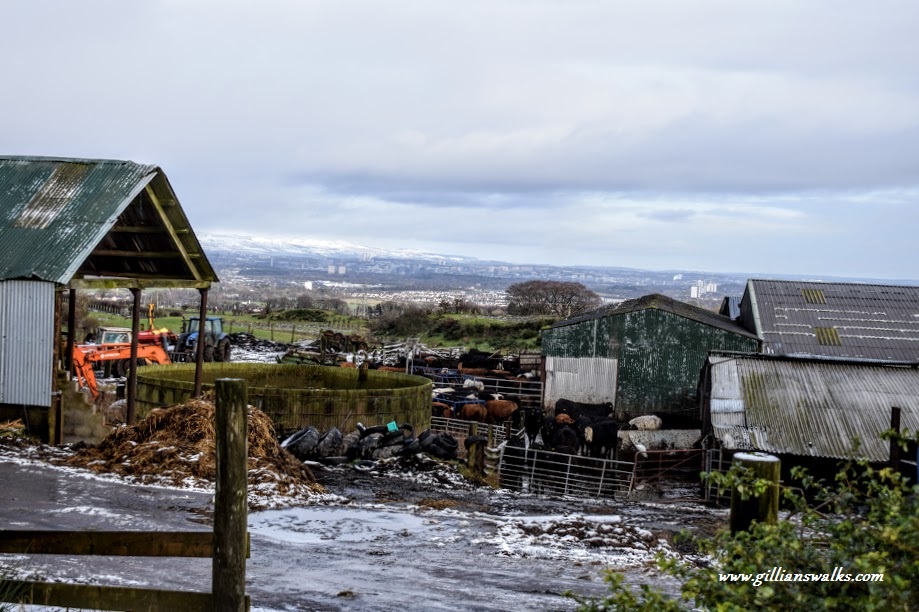 The muddy section came next as we went off-road onto farm tracks followed by very boggy fields and a slippery descent down the hillside towards Glanderston Dam. We were glad of the thick frost which had hardened the ground and considered how much worse it would otherwise have been! Down by the dam was such an incredibly peaceful place and had a lovely feeling of remoteness about it. We spent some time taking it all in. I just loved this part of the walk.

Onwards to the top of the hill next! It was very wet underfoot but after a fairly gentle ascent we reached the trig point. We were surprised at how little remains could be found of the iron age fort. Much of it appeared to be covered by grass or otherwise hidden from view. There were a few collections of large boulders dotted around…. was that the fort? The views from the summit made up for the lack of an obvious fort and we enjoyed a bite to eat up there whilst identifying landmarks visible from our vantage point.

We retraced our steps back to the other side of the dam to pick up a minor road skirting around Glanderston Woods (I believe used as a filming location for the Outlander TV series!)  The rain had come on by now but not ones to let a bit of water dampen our enthusiasm, when faced with the option of a shortcut back to the car (we took a wrong turn when too busy chatting) we were both enjoying ourselves sufficiently to continue with the planned route. Quiet country roads turned more urban as we reached the village of Neilston, where we were surprised to come across a woman training her bird of prey in a large field! Honestly, the sights you see when out a walk with me….. 🙂

Check out my other walks in East Renfrewshire >> HERE

A stroll around Brockle Woods from Annbank today. Avoiding the crowds we thought might be elsewhere!
A wee adventure today all within our local authority area! Cycled from home to train station, hopped on a train to Stewarton, walked the long quiet way to Dunlop (7 miles - thanks to Susan Jamieson for the recommendation!), lunch at a picnic bench in Millennium Woodland Nature Park in Dunlop, train back to Killie and cycled home. Windchill was extreme but all in all a fab wee morning!
Ayrshire's Wallace Monument was looking very spring-like today 😍! Although it didn't feel it - blowing a hoolie.