A linear walk along “Britain’s most beautiful shortcut”: the Crinan Canal, Argyll.  Starting at the Crinan Basin, the walk takes you along a tarmac footpath/cycle track, making for very easy walking. Watch the Locks being opened and closed, wave to the people on-board the passing yachts, look out for wildlife including deer and many different species of bird. There are several options for extending the walk – see below. 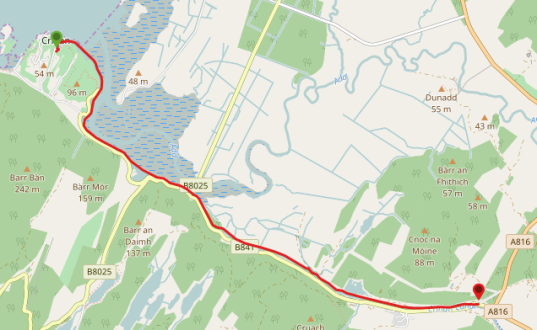 Route: From the car park walk towards the canal basin then follow the footpath to your left around the canal’s edge. Just past the coffee shop cross at the lock and continue along the path past the lighthouse and picnic area to meet with the start of the canal itself. From here it is simply a case of following the canal all the way until you reach Cairnbaan Hotel then retracing your steps back to Crinan. 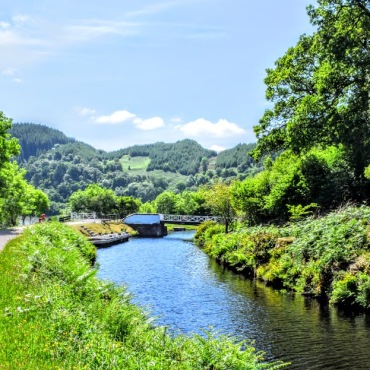 Just before you reach Lock 5 you will come to a large pond and woodland area on your left hand side. If you look carefully, you will see a gate and a footpath leading into the trees – signposted Dalriada Heritage Trail. From here you can do a short loop through the woodland and back out onto the main path. If you are lucky you might spot some deer!

Visit the Carinbaan stone cup and ring markings. To do this take a narrow earth track to the left just past the hotel (signposted) which leads you into the trees and relatively steeply uphill to an open grassy area. Come off the road here and go across the grass to your left where you will see a fenced off area with a style where you will find the ring and cup markings. To the back of this you can continue further to a second set of rocks with more visible markings on them. Return to hotel via same route. 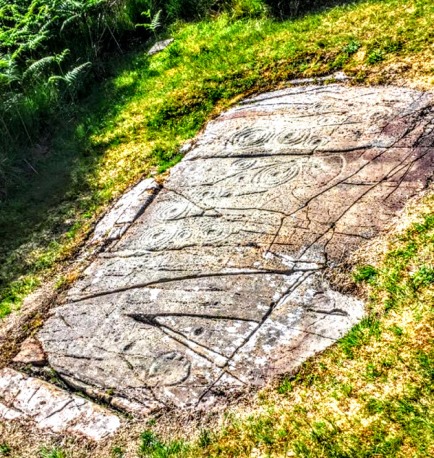 From Cairnbaan you can continue further along the canal to either Lochgilphead or Ardrishaig, adding a further 4 or 7 miles onto the walk respectively (there & back). 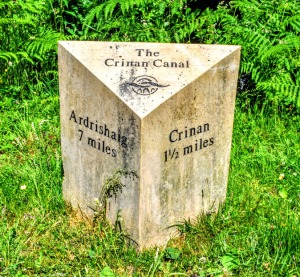 The Crinan Canal walk was recommended to me by a friend who used to sail along it and had always wanted to do the walk. I invited her to come along and show me around the place she had come to love so much and she gladly accepted. The drive up there from Ayrshire is spectacular – through the Rest and be Thankful, along Loch Lomond then Loch Fyne. Before coming back home we also made a de-tour to visit the peaceful lochside village of Tayvallich, well worth it if you have the time.

Close to the start of the walk we met Fraser. We saw a bit more of Fraser than we would have chosen to…. Our first glimpse was of a naked (apart from a speedo) man who appeared to have been in for a swim in the canal and was drying off on the opposite bank. I was photographing a cute little hut at the time which turned out to be his home/art gallery. We then found ourselves in a conversation with him at which point he introduced us to his ‘Honesty Box’ positioned just off the main path beside us. Inside a delightful selection of postcards from the local area could be found, all prints of his own artwork. Having directed us to the price list and given instructions on how to pay, my friend popped £1 into his box and chose a card. He happily informed us we had taken his profit up to £10 for the day. If you are passing, be sure to give him a wave and have a look in his box 🙂 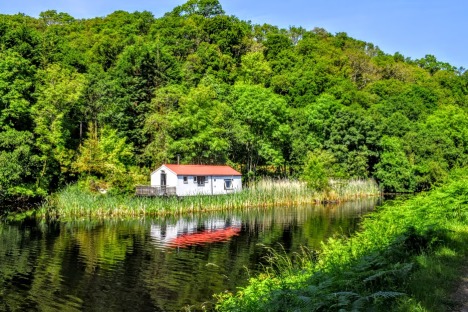 As you can see from the photos we were blessed with warm sunny weather,  adding to the enjoyment of the day, which had been planned weeks in advance. I do believe that this was my first walk along a canal… I have been at the Caledonian Canal in Fort William several years ago, at the end of the West Highland Way. However I didn’t do any walking there nor take the time to learn anything about it or how canal’s operate. I really enjoyed learning about the workings of the locks today at Crinan. My friend has first hand experience of opening and closing them so was an excellent teacher 🙂 We were also lucky enough to watch a small yacht pass through one in Carinbaan as we enjoyed our picnic. Fascinating!

We could have continued on after Cairnbaan however we decided to make this our halfway point and retrace our steps the 4.5 miles back to Crinan. The next lock wouldn’t be reached until Lochgilphead which was a further 2 miles along and we decided that the 9 miles we were already doing would be sufficient considering the long drive home we had ahead. In hindsight we made the right decision because there was to be a VERY long diversion on the way home, adding a couple of hours onto the day and meaning we weren’t home until after 10pm.

What we did decide to do however was to check out the ring and cup markings which are on some rocks on the hillside behind Cairnbaan Hotel. The route is described above and it is worthwhile seeing especially to experience the views back to the canal from the hillside. I think my friend was in mixed feelings about our de-tour because she is terrified of snakes and had convinced herself that they were lurking all around the sides of the footpath waiting to slither out and bite her! As for me, I was quite enjoying exploring off the beaten track. I was genuinely concerned about her at some points but I have to give her credit for being determined to face her fear and so she did.

As well as the canal itself, the scenery all around is simply stunning for the entire walk. We saw some young wild deer peering over at us from a field, and many species of bird can also be spotted if you have a trained eye (which I don’t sadly). Here are some photos of the surrounding views you can expect: