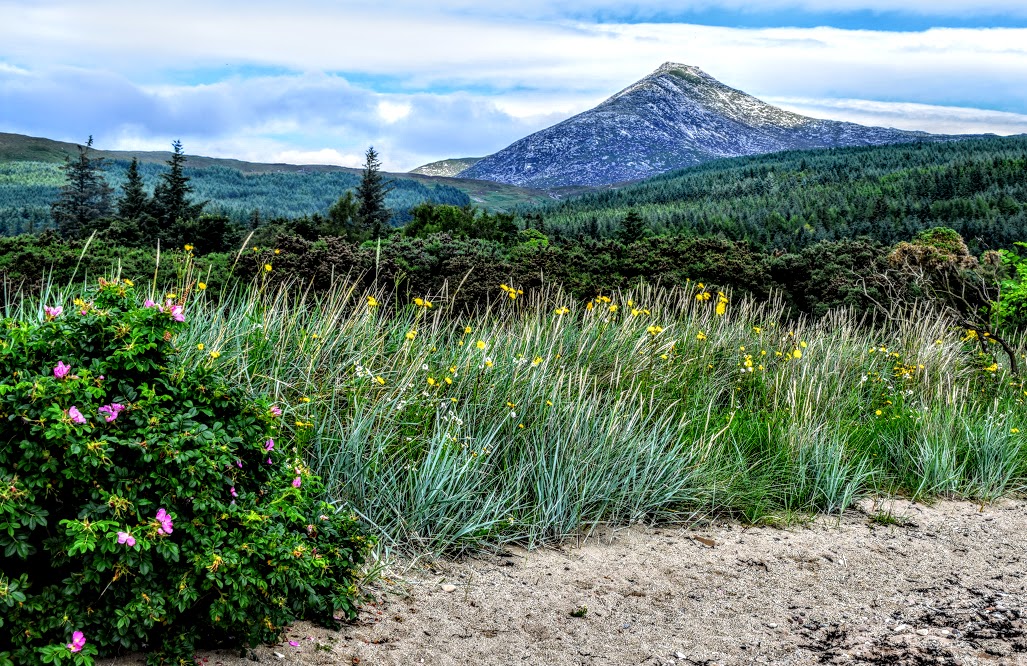 This route takes you from the ferry terminal in Brodick to the summit of Goatfell (874 m / 2866 ft) following the ‘tourist route’, returning with a de-tour through Conocan Wood and past Brodick Castle, a National Trust for Scotland property. Goatfell is the highest peak on the Isle of Arran and from the top on a clear day you will be rewarded with magnificent panoramic views across the island’s array of dramatic granite ridges. 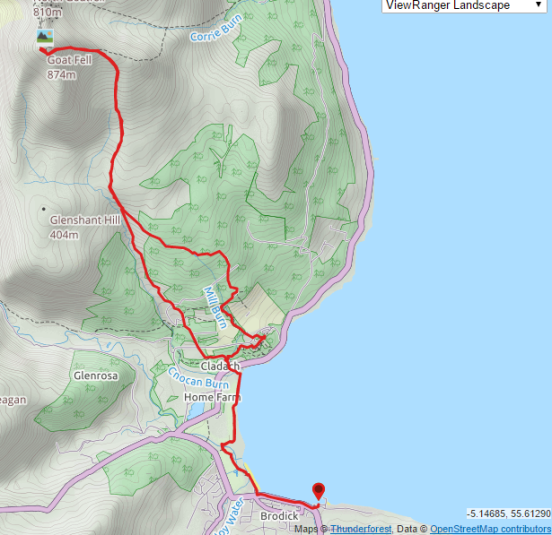 My route starts and ends at the Brodick ferry terminal meaning there is no need for a car however if you wish to shorten the walk by approx 3 miles then there is parking in front of the Wineport Bistro, Cladach (KA27 8DE) which is right at the start of the Goatfell footpath. It is also possible to take a bus from the ferry terminal to this point

Route:  Turn right from the ferry terminal to walk alongside A841/Shore Road through Brodick. Turn right between the putting green and small Co-op store to the end of the car park and continue straight to follow the way-marked ‘Fisherman’s Walk’ along Brodick Bay and through Brodick Golf Course.  Eventually the path emerges out onto A841. Cross the road and head for the Wineport Bistro and the small cluster of shops around it. Beside the Arran Brewery shop you will see the start of the normal access footpath for Goatfell.  Ignore any trails to the left or right, continuing uphill through the forest then out onto open hillside where the path reaches a gate and crosses the burn. Continue on this well-used footpath, the summit visible on your left the whole time on a clear day. A ridge leads you left and to the summit, requiring some scrambling. I would also advise caution on this exposed stretch due to strong gusts of wind which are common even on calm days. Once at the summit return downhill via the same route all the way to the footbridge where the path crosses the burn. Here take the left fork to return via Brodick Castle. The path very quickly enters Conocan Wood, following a burn down to a small reservoir. Keep to the left of the reservoir and the track leads you through the trees and down to a crossroads with two tracks on your left, one straight on and one going right. Take the ‘straight on’ option with the tracks becoming increasingly narrower as you progress. At another crossroads continue straight again, this time zig zagging down to a third, where you turn right. After a short walk the path forks: take the left side then left again at the next fork, following NTS way-markers in the direction of the Rangers Centre. From the Rangers Centre cross the road and go slight left to pass through a gate and around to the front of Brodick Castle. After passing directly in front of the castle, take the path on the left down past some stone toadstools and continue along to the end of the path. Here turn left and you will emerge back out at the Arran Brewery shop and Wineport Bistro. Retrace your steps back to the ferry terminal via the Fisherman’s Walk.

First of all, let’s answer the burning question which my friend Dianne asked me on the day and I couldn’t answer (quite shocking considering the number of times I have climbed it!): Why is it called Goatfell?  A quick look on Wikipedia tells me that the Gaelic name for the peak is Gaoda Bheinn. Further research suggests that ‘Fell’ is a word that refers to mountainous landscapes, and the ‘Goat’ part probably comes from the Gaelic ‘gaoth’ or Old Norse ‘geita’. But why goat?! Possibly a result of folklore – have a read at this article 🙂

Goatfell was on my Trail 7 Summits Challenge list for 2016. I had a failed attempt in April and so was back today to try again! This time accompanied by Dianne and her dog Mutley. It was my first hillwalk with a dog and I realised there were loads of things I hadn’t considered before about this: first there is the fear of them needing the loo whilst on the ferry and then the issue of what to do with them while you go and have your bacon roll or macaroni cheese in the cafe during the 55 minute crossing;  then there is remembering your poop bags and where do you put it if you are on a mountain and you now have a bag full of poop?! I was surprised how little they need to eat during the adventure, and had never thought about how to give them a drink in the absence of burns and streams. And particularly for smaller dogs like Mutley, how on earth do those wee legs carry them so far with all the jumping he had to do?! The Arran rocks are granite and so pretty rough to touch – does that not hurt their wee paws? Finally, if you let them off the lead will they wait for you or do you run the risk of them running off ahead and maybe getting lost? It was a learning experience I can tell you! What I can say is that Mutley was a star: he waited until we were off the ferry to do his business, didn’t do any poops on the mountain, drank water by Dianne pouring it out a bottle into her hand, made it all the way to the top only being carried a little over the huge boulders on the summit ridge and never complained once! He even became quite loyal to me on the way down, regularly turning around to see where I was unless I stayed in front. We joked that he knew I was navigating so wanted to make sure he could see where I was at all times 🙂 But who knows what goes on in their wee heads.

The walk from the ferry terminal to the Goatfell access path was lovely – across Brodick Bay and through the golf course. It did however add 3 miles onto our day, which seemed longer on the way back! I was a little apprehensive about following the ‘tourist trail’ to the top, with memories of it being long and boring from my annual trips up there as a youngster. However I can honestly say that I really enjoyed it this time. Perhaps because it had been years since I had last climbed this route, perhaps thanks to my renewed appreciation for all things outdoors this year, I don’t know. It is true that being able to see the summit the entire day did make it feel like we were never going to get there, but the chat was flowing and there were plenty of ‘interesting’ people to keep us amused…..

Ahead of us and spoiling the landscape was a lady dressed head to toe in fluorescent pink lycra leggings and crop top as though going to a yoga class. Her friend, dressed more suitably for the hike in shorts and vest had THE smoothest, brownest (fake?) and shiniest legs I had ever seen. As though that wasn’t bad enough, when we caught up with them we learned that their 10 year old sons were on the hill somewhere below (they had lost sight of them) and as we reached the summit they started to shout with delight across the mountainside as they spotted them about a mile away climbing up a steep, pathless, boulder strewn side of Goatfell! I was in shock seeing how proud they were of their sons doing something so potentially dangerous had the weather taken a turn or one of them had fallen. Neither of them had a bag or so much as some water to drink….. People really do underestimate the dangers of the Scottish hills, never more so than on a touristy one like Goatfell. I could do nothing but shake my head in disbelief. Less shocking than that but still rather a strange sight was on the way back down:  a guy in his mid-20s attempting the ascent wearing a tweed suit complete with shirt and tie!

We also passed a family group consisting of a few adults and 7 or 8 kids who were climbing the mountain for one of the kids’ birthdays. I smiled as I saw them stop at some boulders to present a cupcake with one candle in it and sing happy birthday to the boy 🙂 It reminded me of my own 12th birthday: having been going into the hills with my parents most Sundays since I was 5 and coming to Arran each summer for many years now, my request for my 12th birthday was to be at the top of Goatfell at 12:12pm (the time at which I was born). Not your average request from a 12 year old I am sure!

My favourite part of the day was the ridge to the summit. It was more of a scramble than anything else and on the more exposed sections random strong gusts of wind almost knocked us off our feet a few times! I learned to listen out for the gusts coming across the hills a few seconds before hitting us, giving me enough time to stop and hold onto something or get a firm footing until it was over. Scary but exhilarating at the same time! I dread to think what it is like on a windy day though!!

Reaching the summit of Goatfell you are rewarded on a clear day with (in my biased opinion) truly the most stunning mountain views imaginable. Having looked at the same (beautiful) view down to Holy Isle all day, words cannot describe the feeling of reaching the top and seeing the landscape open up in front of you. Look out for the seagulls which frequent the summit too, looking for crumbs left over from the many sandwiches consumed atop Goatfell!

The return route of our walk started by retracing our steps but then took a de-tour to pass in front of Brodick Castle. I was glad I had mapped out a route before starting because once inside Conocan Wood things began to look like a maze and although the footpaths were all named trails it wasn’t clear where any of them led until nearer the end when the Rangers Centre was signposted. It was definitely a worthwhile detour though and the first time I had been up close to the castle! Dogs aren’t allowed in the walled garden area so we didn’t venture down there but if you have the opportunity and time allows you can extend the walk slightly by taking the steps down to the left in front of the castle and following the path to loop round the gardens then join back up with the main route again at the other side of the castle. 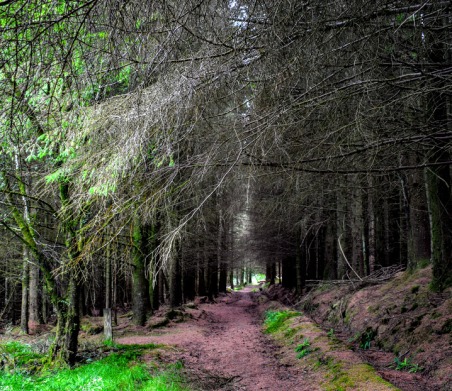 From Brodick Bay, we stopped to take a look back at Goatfell. It looked so far away, like an optical illusion: how could we have walked all that way?! With an hour to spare before our ferry, we enjoyed a well-deserved Irn Bru at The Douglas Hotel whilst reminiscing on a brilliant day. Mutley took the opportunity to have a nap!