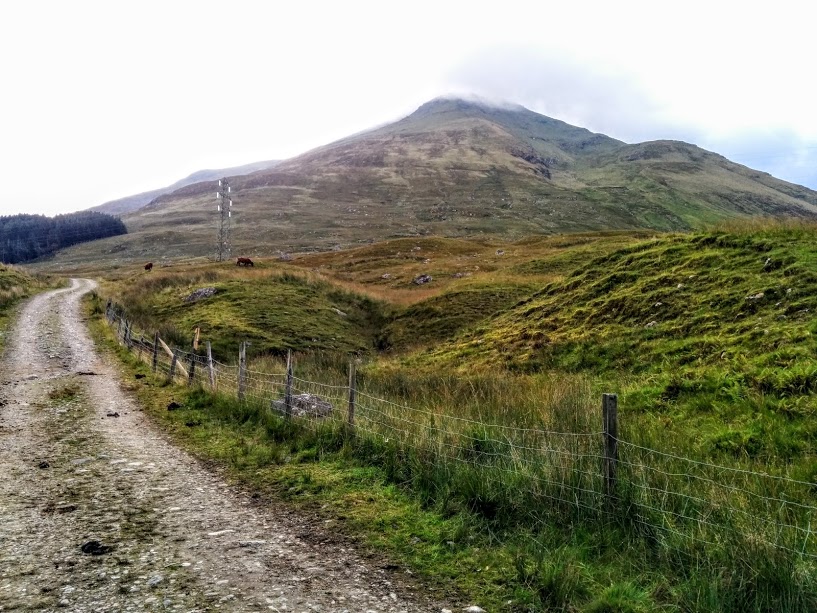 The Munros Ben More (1174 m / 3851 ft) and Stob Binnein (1165 m / 3822 ft) lie close to Crianlarich and are easily accessible from A85. Steep and boggy for much of the way but no real technical skills required. A little scrambling on the (long) descent from Ben More towards Stob Binnein and a very peaceful but steep and slippery walk back down from the bealach into Ben More Glen. Keep a look out for the waterfalls visible behind you as you descend!

Buy the OS map for the area HERE

Route:  From lay-by on A85: Turn right onto A85 and walk along until just before Benmore Farm. There is a small wooden way marker on the left indicating the start of the route to Ben More. Cross the fence at the style and follow the farm track winding gently uphill towards the base of Ben More. After crossing a second style look out for a vague footpath leading off to the left to start a steep ascent up Ben More. The track becomes more obvious as you gain height, passing alongside an old dry stone dyke and then to much rockier ground as you approach the top. A large cairn marks the summit and there is a trig point a little further along. The onward path to Stob Binnein is obvious. Watch out for one section shortly after leaving Ben More where the path ends abruptly atop a crag and appears to continue below it. If you backtrack a little there is a de-tour around it to the left which offers a far easier and safer solution. Nonetheless, the initial descent from Ben More is somewhat of a scramble. On reaching the bealach, the track up Stob Binnein continues ahead and is easy to see on a clear day. The final approach to the summit is relatively flat and again it is marked by a cairn. Retrace your steps down from Stob Binnein to the bealach where you will see a large boulder to the left. To the right of it a very faint footpath leads downhill to meet up with a stream after a short distance. Continue on this path to reach a wide farm track in Ben More Glen which returns you to the style where the walk began. 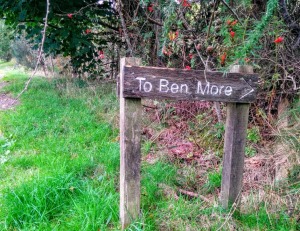 Back at the start of the year I put out a message on my Facebook page declaring that I was doing the Trail Magazine 7 Summits Challenge this year and asked my friends to suggest some hills for me. Gleb suggested Ben More and I remember feeling really excited to add a Munro to the list however also quite nervous about how I would manage physically, having mainly been doing low level walks at that point. It’s not like I had never done a Munro before – I climbed loads as a child – but it had been a loooong time! Gleb agreed from day one that he would accompany me on the hike so that alone increased my confidence, knowing he had far more (recent) hillwalking and navigating experience than I did. Oh and by the way, as soon as Gleb suggested Ben More I added ‘and Stob Binnein’ onto the end: no point only doing one of them is there?!  😉

So the date was set for 18th September when it would be cooler and I would have had the chance to build up to it.  The forecast turned out not too great however on arriving I was pleasantly surprised to see the sun had his hat on. We parked in the lay-by next to Loch Lubhair approximately 3/4 mile from the start of the walk. It was here that I was introduced to Neil for the first time and he announced early on that he hadn’t been up a hill for decades. I assumed he was exaggerating and laughed it off only to have his story confirmed a few minutes after setting off when he stopped to remove a packet of chewing gum from his rucksack which was digging in to his back….. it went out of date in 1997, the last time the rucksack had been used!  At the top of Ben More a fellow hiker, unprompted, made a joke about the age of Neil’s rucksack, remarking that he “didn’t look old enough to have a rucksack that colour“!! For those keen to know what it looked like, it was very similar to the one pictured on this Japanese ‘used and vintage clothing’ blog 😀 We did laugh about it, but at the end of the day it did the job and Neil proved to be fitter than me: It turns out that tackling a double Munro 20 years after you last ventured up a mountain is more than achievable when running and yoga are included in your list of hobbies. I certainly would not have fared half as well had I been in his position.  Not one complaint from him the whole day 🙂

The guy at the top also told me I “had good balance“. It would appear that “when you know what to look for it is easy to see who is used to hillwalking and who isn’t“. Very impressive indeed considering he and his two companions were a fair bit behind us all the way up and they couldn’t see us for the final half hour due to low cloud! I was a little creeped! I asked him to take a photo of Gleb, Neil and I at the cairn, we returned the favour and went on our way!

It was extremely wet underfoot for almost the entire walk, much worse than I had expected. Ben More is basically a massive sponge! Things didn’t really dry up until quite near the top. The information I had read on Walkhighlands said there wasn’t much of a path on the lower part of the ascent however we stumbled across one….. Well, I am not sure you could call it a path, it resembled more of a stream at some points and a seeping boggy sponge at others. It nonetheless zigzagged its way up the mountain and personally I would rather follow this sort of path than no path at all so I was happy with our find!

I was first to succumb to the hunger pangs and we stopped for a bite to eat approximately halfway up. What a view! In hindsight I am glad we rested here and spent some time taking in our surroundings before they disappeared under cloud for the remainder of the day.

“Who is up for staying in a bothy in the winter?” was one of Gleb’s crazy suggestions for a future adventure. I politely declined, but on reflection I don’t know why I am such a scaredy cat because deep down I would love to do that!! I think perhaps it was the Winter part that made me scoff at the suggestion, considering it would be my first bothy experience….. But just imagine a full day winter hiking, followed by spending the night in the middle of nowhere, snow all around and a fire going in the stove to heat the bothy, and the prospect of another a full days hiking starting early the next day, taking you even further into the wilderness….  It does sound good, right?!   That’s one thing I have come to learn about life -surround yourself with people who push you out of your comfort zone and you will experience things way beyond what you think you are capable of.

As we approached the summit it became clear that we were not going to have much of a view. Cloud whisped around creating an eerie feel and unfortunately we remained in it until we came down off our second Munro, Stob Binnein. From time to time a gap would appear in the cloud giving a glimpse of either where we were headed or where we had come from but it never lasted longer than a few seconds. By the time you had shouted “hey guys look quick“, and someone had turned around, the view would be gone!  On all my other hill walks this year I had been blessed with cloud free skies and beautiful views. Although I was disappointed not to be rewarded with a view on this occasion, it brought back memories of hiking as a child and the fact of not being able to see beyond a few feet in front of me gave the whole experience a more exciting, mysterious and exhilarating feel: Being inside the clouds is not somewhere that everyone can confess to having been! 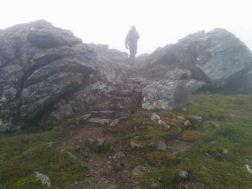 From the top of Stob Binnein the return route is to retrace your steps back to a bealach between the two mountains and then head directly down into Ben More Glen from there. The descent into the glen was steep and very wet underfoot.  The going was quite slow as we tried to avoid slipping on the boggy grass.  It was a nice route though with views into the glen and across to the neighbouring mountains, as well as some nice waterfalls. We stopped for a break on the hillside and I remember everything being so incredibly peaceful. The three of us sat in complete silence, taking in the beauty of our surroundings. There were no roads in sight, no buildings, no other people. Total bliss. I felt so incredibly fortunate to have the good health to be able to venture into such an idyllic wilderness. 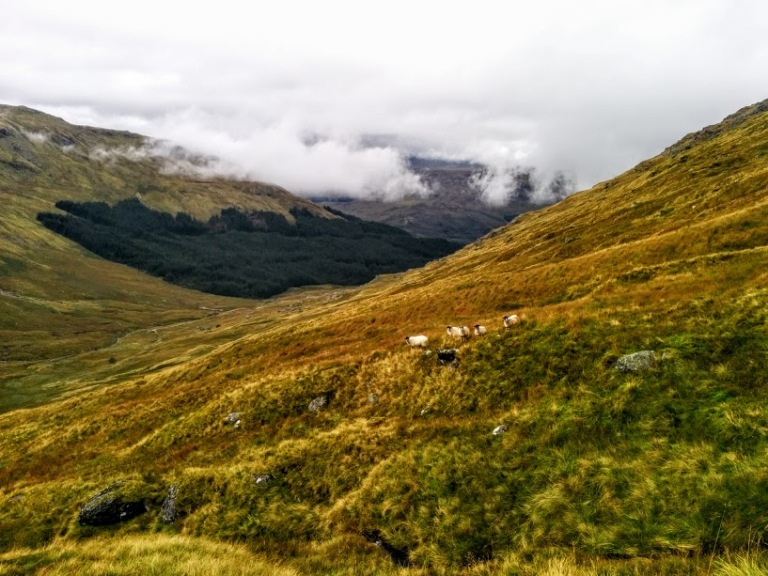