A combination of coastal footpaths and inland countryside tracks give this circuit variety. Starting along the promenade, delve into the history of the village of Charlestown as you pass the 14 limekilns which were quarried into the cliffs in the 1700s. Walk on the former Elgin railway followed by a minor road high behind the village before returning to the shorefront via a series of farm and woodland tracks. Pass the impressive Broomhall House en route, as well as the Limekilns War Memorial. Expect some mud in places. 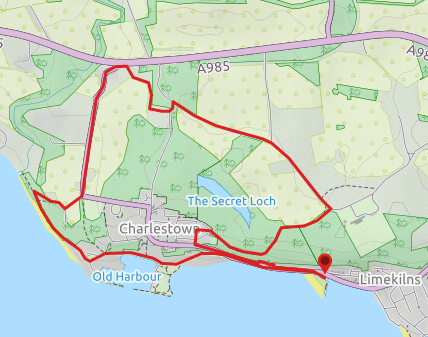 Route: Leave the car park to walk along the Promenade in the direction of Charlestown. Pass the War Memorial then turn left down Saltpans. Saltpans soon becomes East Harbour Road where you pass the limekilns themselves. Continue onto West Harbour Road which bends to the right and leads onto a narrow earth track.  After a short distance you will then walk along the wooden slats of a disused railway to emerge at a bridge on your right. Continue past the bridge but then look out for a fork on the right. Climb the stairs and cross the bridge then continue along the track behind a large house. Turn left at the fork and left again onto West Road. Just before reaching A985 turn right onto the NCN 76 cycle track. This road bends to the right before passing the Scottish Lime Centre Trust building before starting uphill and bending to the left. At the end of the road turn right and continue along this track towards Broomhall House.  As you approach the house you will come to a crossroads where you should turn right, heading away from Broomhall. Pass through the gate and follow the track as it bends left and passes the site of a former quarry. The next section of footpath is on high ground above the Promenade and emerges out of the woods at Charlestown Bowling Club. Pass the car park then turn left onto Cross Row before using the gap in the stone wall to take the steps down onto Main Road. Turn left. This road becomes the Promenade here and you will again pass the war memorial (climb up for a closer look if you wish). The car park is just a little further along the road on the right.

We have been trying out different routes around Dunfermline of late whilst walking a friend’s dog and decided to venture to the coast today. Had we given it some thought beforehand we would have realised that taking a golden retriever to the shore when you have no intention of letting him off the lead is not big and not clever….. However, the story starts before that…

It was the first time we had taken one year old Bodhi out in the car and we were a little nervous about it. Imagine our surprise and relief when we opened the boot and he jumped right in and made himself comfortable! Brilliant! We literally said “Wow, that was much easier than I expected!” Less than a minute later and he had clambered across into the back seat and was using a window sponge as a toy…. Ok, perhaps not quite as easy as we thought. We were very insistent that this was not on and promptly marched him round the car and back into the boot. Only for the same thing to happen again (minus the sponge this time which had been safely removed from his sight). There he remained for the 15 minute journey to the start point of our walk. Humans 0, dog 1

The next incident occurred within 10 seconds of getting out the car at the other end. Bodhi spotted the sea, or the dog on the beach, or both we are not sure. In any case he made a sprint across the grass towards it, his lead extending at top speed and Lesley’s hand gripping the handle bracing for the inevitable tug. Bodhi kept going but the lead reached it’s limit and Lesley summersaulted landing bum first on the grass. After checking she was ok I started racing after Bodhi who was now on the sand, still running, but now with his whole lead bouncing behind him as well. One step off the grass and onto the piles of dried black seaweed and I somehow managed to put my foot right into some sort of gooey brown gunk.  Goodness knows what the two women on the beach must have thought of the scene!! We were able to laugh it off, but we did decide there and then not to bring him a walk near water again until we were able to trust him (and let him have fun) off the lead…

So, not exactly the ideal start to the day but let’s get on with the actual walk now! It had been Lesley’s suggestion to come and see the Limekilns and having done some research online I was really looking forward to exploring the area. It is definitely my favourite of all the walks we have done so far around Dunfermline: varied, scenic and with interesting historical features. The walk was ideal for dogs, our only concern being a short stretch along West Road which has no pavement.

The humble dandelion... A weed to most people, but perhaps these few facts about them will make you see them in a new light: 1 Every part of a dandelion has a use. From roots to leaves to flowers. 2 It is said that the dandelion is the only flower that represents three celestial bodies the sun, moon and the stars. The yellow flower is the sun, the seed head puffball is the moon and the seeds dispersal is the stars. 3 The flower opens in the morning and closes in the evening. This process is called diurnal this keeps the insects out of the flower during the night. 4 The name dandelion is taken from the French word “dent-de-lion” this means lion's tooth referring to the coarsely toothed leaves. 5 The seeds of the dandelion can be carried by the wind as far as 5 miles from their origin. 6 Dandelions are rich in vitamins such as A, C and K they also contain a high level of iron, calcium and potassium. Ideally suited to Asian cuisine and for salads. 7 All parts of the dandelion are used as an ingredient of wine and beer. The dandelion root can also be used as a substitute for coffee. 8 The dandelion flower has one of the longest flowering season of any plant. They flower early in spring and don't finish till early winter so are a great source of nectar for bees. [source: Candide UK app] 📷 Gillian's Walks
Clouds! Not used to seeing these and especially not so dark. Who got the rain today??
Amazing what you find by the roadside as you walk past! Meet the Poet's Narcissus. What beauties have you been spotting of late? #flowers #springtime #springhassprung #beauty #nature #plantlife #wildflowers #Ayrshire #scotland #coloursofnature #thenaturalworld #poetsnarcissus
The first bluebells are starting to pop their heads out 💜 #bluebells #springtime #scottishflowers #wildflowers #purple #springhassprung #woodlandwalks #naturephotography #naturelovers #covid_19 #stayactive #Ayrshire #kilmarnock #eastayrshire #easterweekend
Baby horse chestnut leaves are sooooo cute! #newgrowth #spring #trees #horsechestnut #babyleaves #kilmarnock #eastayrshire #woodlandwalks #walksfrommydoorstep #keepingactive #walk1000miles #onewalkaday #woodland #newlife
Caprington Castle looking fabulous in todays sunshine! #castlesofscotland #countryestate #woodlandwalks #ancientwoodland #castle #castlegarden #sunnydays #springsunshine #bluesky #howtheotherhalflive #kilmarnock #eastayrshire
Advertisements
%d bloggers like this: