A combination of lowland hills and rocky coastlines: perfection in a walk! Starting in the picture-perfect fishing village of Dunure you will wind your way up into the Carrick Hills before descending to sea level to return to the beginning via one of the most stunning and rugged sections of the Ayrshire Coastal Path. On a clear day you will enjoy spectacular panoramic views from the summit of Brown Carrick Hill (287 m / 941 ft): the best vantage point in the area!

IMPORTANT NOTE: IT IS ESSENTIAL TO CHECK THE TIDE TIMES BEFORE SETTING OFF, AS A HIGH TIDE COULD PREVENT YOU FROM PASSING THE COASTAL SECTION OF THIS WALK. Please leave 2 hrs either side of an expected high tide.

Click HERE to purchase the official Ayrshire Coastal Path Guide Book, in which this walk is featured.

Route: Walk up the hill from Dunure Harbour and turn left onto Castle Road. This takes you gently uphill through the village of Fisherton. At A719/Ayr Road cross straight over onto the minor road next to the school. At a T junction turn right onto a gravel track as indicated by the ‘Footpath’ sign. Turn left after a short distance, to start uphill again (notice the green arrow way markers on the fence to your right before the turn). There are a couple of stiles to cross as you ascend. On reaching a small pond where the path forks, keep left. The track soon disappears but you want to aim for the corner where the trees meet on your right. There is a stile here (beware barbed wire) to help you cross into the forest. As you walk through the clearing a gap will appear on your left and this leads to a kissing gate and out onto the open hillside. Veer left here to reach the ridge then head in an easterly direction to reach the trig point at the summit of Brown Carrick Hill. From here aim for the right-hand (inland) side of the radio masts positioned east of the hill summit. Walk beneath the masts to a stile over the fence and ignoring the zig zagging tarmac on the left, pick up a faint grassy footpath gently descending ahead across the ridge.  On reaching a minor road turn left and continue along it for approx 1.4 miles to reach A719. Carefully cross the road then turn left to walk along the roadside verge for a short distance, turning right towards Heads of Ayr Caravan Park. As you reach the entrance, turn left to pass behind some caravans, looking out for a kissing gate on the right with Ayrshire Coastal Path signage on it. Turn left as indicated to walk along the field edge beneath the caravan park and up onto the embankment of a disused railway. Eventually a kissing gate is reached which leads onto farmland. After crossing the second field you reach a steep gully. Take care descending the steps (hand-built by a team of volunteers and funded by the Rotary Club of Ayr). Turn left at the bottom to walk along the rocky shoreline. You will soon reach another steep grassy gully. Look out for a series of white discs painted onto rocks to stay on the right course across the farmland and grassy clifftops. You will be led back down onto the shore and through a gap in some rocks onto the sandy beach just north of the fishing village of Dunure. Head across the beach and around the harbour, completing the loop. 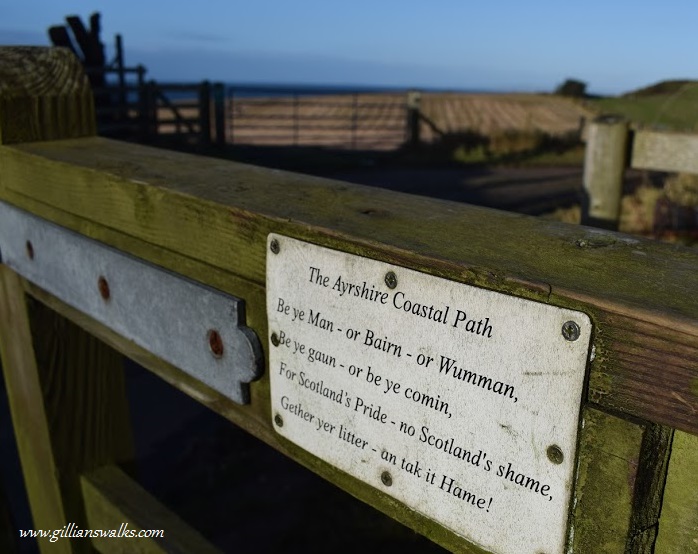 It took me two attempts at this walk to get it right, a tiny error on the summit taking me off in the wrong direction first time around!  The result was a complicated descent and not one which I would encourage anyone else to follow, unless you like the sound of steep hillside fields full of cows and sheep? It was a beautiful warm summer day when I set off alone to try out this route. The Ayrshire Coastal Path official guide book suggests it as a high-level de-tour and with my local knowledge I knew that it could then be made into a loop using the coastal path trail to return to the start. The radio masts atop Brown Carrick Hill can be seen for miles around and I had passed them by car hundreds of times so I was very keen to get up there!

The walk to the summit was uphill from the get-go however good tracks facilitated things for most of the way. A lovely little fishing pond appeared out of nowhere just where the track joined with the Dunure-Maybole hill path (one for another day!). The light was hitting it just perfectly! I thought it would be a nice place to have a picnic some day but my husband has since informed me that I would need to share my sandwich with a swarm of midges so perhaps not… From this point there was little by way of path so I was grateful once again for my pre-plotted route on Viewranger showing me what way to walk. Once out on the open hillside I heard the chatter of voices behind me and on turning around I saw two men approach from the same direction I had. For some reason I got spooked and started to imagine some neds from the villages following me up planning some nasty act and I practically jogged across the ridge to the trig point. From there the view was simply stunning, and I got so carried away taking photos that I was still there when the men caught up with me. To my relief (although I wasn’t really surprised) they were really nice guys, both high school teachers in the area, and we chatted for a while about the view, other walks we had done, where we were headed the rest of the day, etc. Silly brain playing tricks on me! 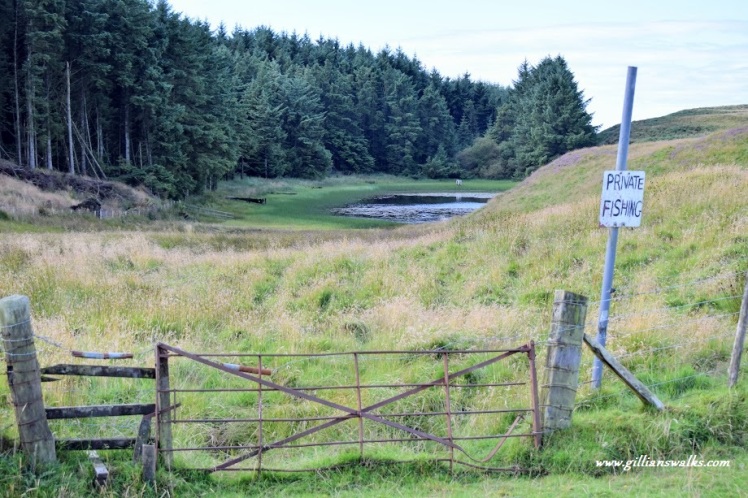 From the trig point I could clearly see the radio masts however I wasn’t sure whether I needed to aim for the seaward or inland side of them to pick up my route down to the road. The whole hill is farmland with barbed wire fences all over the place so I spotted a gate and headed for it. From here a path of some sort led me further downhill to another gate and so on until I eventually checked my position to realise I was way off course and was going to have to clamber down the hillside to meet up with the road further down than planned. Honestly this must be the steepest farmland in Scotland! Thankfully the cows and sheep were very friendly, moving out my way as I trampled over their grass.

So I eventually returned 5 months later to try the walk again, this time aiming directly for the masts via a different gate further along the fence. My friend Eve came along this time. She was new to hills but liked coastal walks and I knew that she would just love this whole route! Stopping at the trig point a little longer than we should have (we are on a trig bagging mission this year and this was #1!), we had fun taking photos from various angles and admiring the awesome view across to the snow-capped mountains of Arran, Ailsa Craig and all the way along the northern section of the Ayrshire coast. An early morning haze hid the view to the east which I was disappointed about as I knew that the Galloway Hills were out there! After finding shelter from the icy wind long enough to have an alfresco lunch, the haze began to lift slightly and the outline of the hills near New Cumnock and south to Straiton became visible. Just magical.

We stayed inland of the masts this time around and as though to make me look like an idiot, a surfaced road appeared at the other side, zig zagging right up to them! I knew that this was probably the one that led to the road. So easy…. We saw a grassy footpath leading downhill in a north-easterly direction which we decided to follow instead as it was more aesthetically pleasing! As expected it emerged onto the road, from where the walk down to A719 was really enjoyable, with views across to the Isle of Arran the whole way. 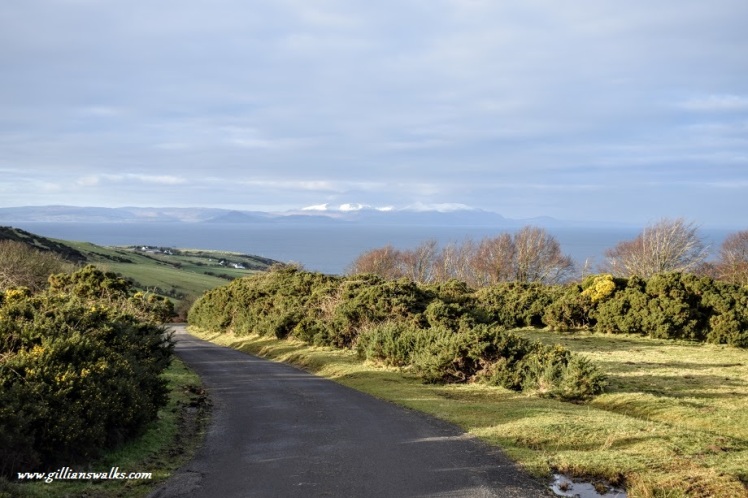 Now it was time for the rookie error! We headed past Heads of Ayr Caravan Park,  along the dismantled railway, across the fields and down the new steps of steep Fisherton Gully to the rocky shore. The views had been simply stunning the whole way and you can see some examples of this from the photos below, taken during my summer trip! Today however, I had been able to tell for some time that the tide was further in than I thought it would be, but I hoped that there would be enough shoreline left to pass safely the short distance to the next gully which would take us once again to higher ground. Alas, we were too late. I had carefully checked the expected high tide time before setting off: 3pm. The time was now 2pm and at one tiny section which jutted out that bit more than the rest, the tide was already lapping the bottom of the cliffs. There was no way past. I was gutted, not least because I loved this section of the Ayrshire Coastal Path and I knew that just around that tiny cliff was another bay which would have been passable. Had we arrived at this point even 15 minutes earlier we would have been able to get round no problem. There was nothing else for it but to clamber back up Fisherton Gully. Fortunately, being a Pathminder for the Ayrshire Coastal Path I had been out working on the gully recently, which meant that I knew of a way to access the main road without retracing our steps all the way back to the caravan park which would have been enough to make us both cry. We headed back to Dunure along the grass verge of the A719. Not the best end to the day! It just goes to show… even though I knew to check the tide times, and did so, and even though I actually work along the trail and knew this area was prone to hide tide issues, I still managed to get caught out!