Rural south Ayrshire at it’s best! Even the drive to the start of this walk is scenic and will leave you desperate to park up and head out! Awaiting you lie quiet country roads, muddy farm tracks and a steep ascent to the fantastic viewpoint atop Barony Hill (310m/1017ft). There is even an optional de-tour to visit the hidden remains of a impressive disused quarry and limekilns.

There is very little car parking at the start of this route. Space for one car at the end of the forestry track (OS Grid Ref NS 33356 02983) 0.5 miles south of Auchalton Meadow Wildlife Reserve. Alternatively you can park on the roadside verge at the entrance to Auchalton Meadow Wildlife Reserve where there is space for a few cars. This will add 1 mile on to the total return walk length.

Route: Follow the minor road south until you reach a small settlement of houses on your right. Turn towards them and continue along the quiet road to cross a stone bridge and cattle grid. A little further along the road ends at a farm and becomes a loose gravel track. Pass through the “gate” (at the time of my visit this took the form of an elasticated rope hooked on between two fence posts) and follow the track steeply uphill. It soon flattens out and begins to traverse the hillside, gradually becoming boggier as you go. On passing through a gate, two limekilns come into view and you have a burn to cross. At this point should you wish you can follow the faint grassy footpath up to the left next to the limekilns to see the impressive remains of the disused quarry. Take care of the steep drop! Loop right around the quarry, descending to a stone ruin below (no path) and back onto the track. Continue until just before reaching a gate leading to a forest. The path up to the summit of Barony Hill starts here, however it is very difficult to spot. On the ground just to the left of the track look for an odd a wooden feature and head uphill from here. You will soon pick up a faint footpath and see the tall metal ‘oak leaf’ way markers which will lead you to the summit trig point. Return via the same route.

The plan for today was to spend the best part of it volunteering with the Scottish Wildlife Trust, and we were headed to Auchalton Meadow Wildlife Reserve in rural south Ayrshire. I’d never been there before, but I could see from my map that it wasn’t too far from the villages of Dailly and Straiton, both of which are brilliant walking destinations. I knew that the plan was usually to be back at the SWT base in Irvine by 4pm, so there was a high likelihood we would finish work around 3pm…. If I took my own car (rather than travelling in from Irvine with the other volunteers) surely I could fit in a short walk in the last couple of hours before light faded?? I wasn’t often down that way and being over an hour’s drive from home I was keen to make the most of the opportunity! Just in case things panned out as expected, I mapped out a couple of different routes on Viewranger which I could choose between depending on what time was available. The first was a short village ramble near Crosshill which looked like a series of country roads so I was confident it would be pleasant. The second was the one I really hoped would be possible: Barony Hill. The normal route to it’s summit seemed to be from Dailly however on my map I could see a track leading in from Auchalton where I’d be working.

With the help of Google Maps I found the reserve just as everyone else was arriving. The sun was shining and we spent a productive morning clearing the area of blackthorn and at 2pm the day was declared a success and we headed back to the cars. RESULT! A whole extra hour than I had originally thought: I was definitely doing the longer walk and I was beyond excited. I decided to drive a little further along the road to try to find a reasonable place to leave my car. This proved tricky but after a bit of back and forth I decided to abandon it on the end of a forestry track and hope for the best….. This turned out to be a wise decision since it was already getting dark by the time I returned to the car in the early evening.

Rounding a corner I was amazed to see two old limekilns built into the hillside! They were filled with water, long since abandoned. I just love finding pieces of history nestled away in our countryside and felt a sense of smugness that most people in Ayrshire wouldn’t even know of their existence… until I write about them of course, revealing their location to the world….

The only company I had were the many sheep who obviously used the path and I managed to startle a couple of ewes who were munching from a bucket on the side of the track. They had their backs to me, and as I approached I tried to make them aware of my presence by talking to them,as you do…. They didn’t seem to notice me. I kept a wide berth not to disturb them but just as I was passing they realised I was there and scampered away, one of them tripping over the food bucket on the way….. oops! One other, rather unlikely bit of company I had was a woman riding her horse on the moorland. The sight came as a surprise to me, like something out of a movie. I felt as though I had stepped back in time. I took a photo of the scene, and continued on my way. Twenty minutes or so later they approached me to ask if I was lost, gave me directions to the top of Barony Hill and trotted off in the direction of Dailly.

Although I hadn’t been lost, I was grateful for her help because at the time of her arrival I was pondering where the hill path was. Viewranger said it was right in front of me, making a bee-line for the top. But there was nothing to see! The lady explained that there used to be a maker on the farm track pointing out the way and on closer inspection I noticed a wooden feature on the ground next to where we stood, almost like a step. I headed uphill from there and a very faint path soon revealed itself. Out of nowhere some tall metal ‘oak leaf’ posts started to become visible at various points on the path and I immediately recognised them as being the path marker symbol for the Barony Hill walk from Dailly (I had read about them on the Ayrshire Paths website).

I spent some time at the top admiring the view down into the glen and across to Ailsa Craig.

Clouds had started to roll in and I was aware of the sun getting lower in the sky. I had somewhat dilly-dallied on the way there and was a little short for time now so I set off just as the first few drops of rain fell. After a heavy shower the sun came back out and I was treated to a beautiful rainbow ahead of me. It was on the way back that I noticed a stone ruin off-track which I hadn’t seen earlier. I swithered whether to go and investigate or not: I was aware I was losing light and ideally I wanted to drive home before dark. “A quick nosey“, I decided. A few photos later and I spotted some sort of path leading off behind me. I was just beside where I had passed the limekilns earlier in the afternoon and I had to admit that the hillside behind them seemed oddly unnatural. The path led in that direction so I followed it and almost dropped my camera at the sight that awaited me! I was both in awe and terrified to find the remains of a quarry, the huge ‘caves’ at the bottom so dark I could not even begin to guess how deep they might be. I was high up on the opposite bank looking right down into them and this gave me a strange feeling of unease at how easy it would be for someone to fall into one…. This feeling was perhaps enhanced by the fact that the sun was shining right in my eyes and I had to shield them to see where I was stepping. The photos do not do it justice, you really must go there to experience the true sense of the place. I stayed a while, pondering the life of those who once worked in this remote, hidden location.

The sun set beautifully on my walk and I drove home contemplating all that I had seen and experienced. I could hardly wait to get home and share the photos with my family. One day soon, I thought, I will bring them here! 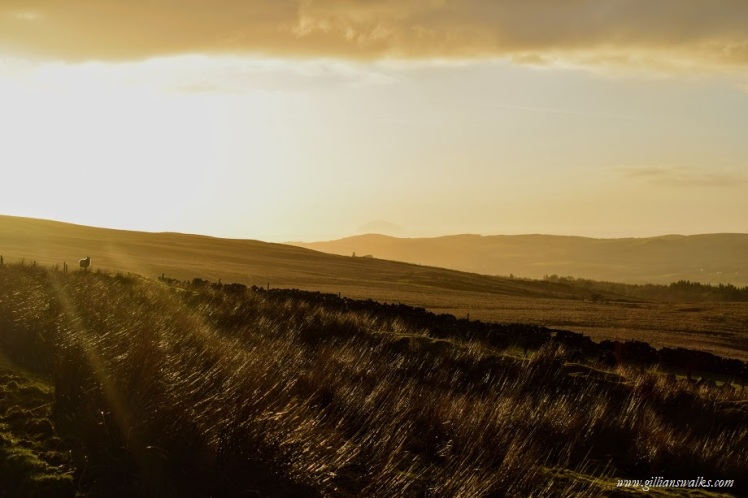 Other walks in this area: