The prominent peak of Dumgoyne dominates the skyline from the villages below. A volcanic plug, it is one of those hills which just seems to call out to you to climb it.  It may be a small hill at 427m (1401ft), but it certainly packs a punch and makes for a very rewarding climb! 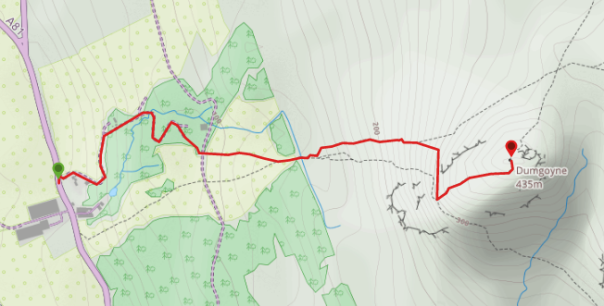 Route: From the lay-by cross the A81 and follow an obvious track up past a small cluster of houses. Continue along, skirting round the outside of a gate and then uphill to pass a new build property. At the end of the line of trees come off the track to follow a faint path on your left, directly towards the foot of Dumgoyne. You will come to a road which you should cross, leading you onto an open grassy area. You can just make out a wide grassy footpath leading towards some trees at the foot of the mountain. Follow this and after crossing over two stiles you are ready to start your ascent at a particularly boggy area!  Take care at this point: there are two possible routes up. The most tempting one is to make a beeline for the summit on an obvious track which can be seen from the bottom.  It is however extremely steep and therefore hard-going. An easier option is to follow the footpath which bears left. Note that it is very easy to miss and you will probably only notice it if it is pointed out to you (see image below for an illustration). This route runs parallel to the other but takes you around the steepest part (rather than up it), swinging round to the right just below the crags to join up with a footpath which traverses the top section of the mountain and leads around the back. From here it is an easy climb to the summit. Return via same route (1.3 miles each way)

I first heard the name Dumgoyne several years ago when I was walking the West Highland Way. It is one of those really distinctive hills which can be seen jutting out of the horizon from the south: every time I drive along the M77 towards Glasgow there it is in the distance.

On this particular day my actual goal was to climb Earl’s Seat. Recommended by a friend for my Trail 7 Summits Challenge list, Earl’s Seat is the highest of the Campsies.  When I started to research how to climb it, my Google search results suggested that doing Dumgoyne on the same day was logical.  Once at the top of Dumgoyne however,  we decided not to go on to Earl’s Seat due to time restrictions. I knew we had only completed just over a mile of the route and the whole thing taking in Earl’s Seat too would have been around 6.5 miles including the return leg.  I knew I would be back soon to do it though and coming today allowed me to calculate my route, work out parking etc!

I had chosen, as I often do, to follow the route info described on the Walkhighlands website for this climb. However on this occasion (in my opinion) it proved to be tougher than other routes. We found the better one by accident on the way back down and that is the one I have described above and on the map. There were a couple of things: the Walkhighlands review talked about the ability to take a shortcut at the beginning to miss out a section of the road to the new build house. At the time of our visit the path was so overgrown that it was hard to see and having tried it out I was left wondering why it exists because following the road is actually much simpler and taking the ‘shortcut’ really doesn’t cut that much distance off. The second issue I had with the Walkhighlands review was that the route took us straight up the steepest part of the mountain when there was actually an easier way just to the left (described above).

About halfway up we saw a man coming up behind us who seemed to me a little odd. He was older (in his 60s), dressed in brown corduroy trousers and a long sleeved white shirt, and had absolutely no provisions with him not even a bottle of water! He caught up with us towards the summit and we got chatting. He claimed to have walked all the way from Milngavie along an aqueduct and then up to Dumgoyne (some 20 miles there & back)… I couldn’t decide if he was crazy in the adventurous sense or in the irresponsible sense: it was a hot sunny day, who ventures out on a walk like that with no provisions?! I really hope he got home safely.