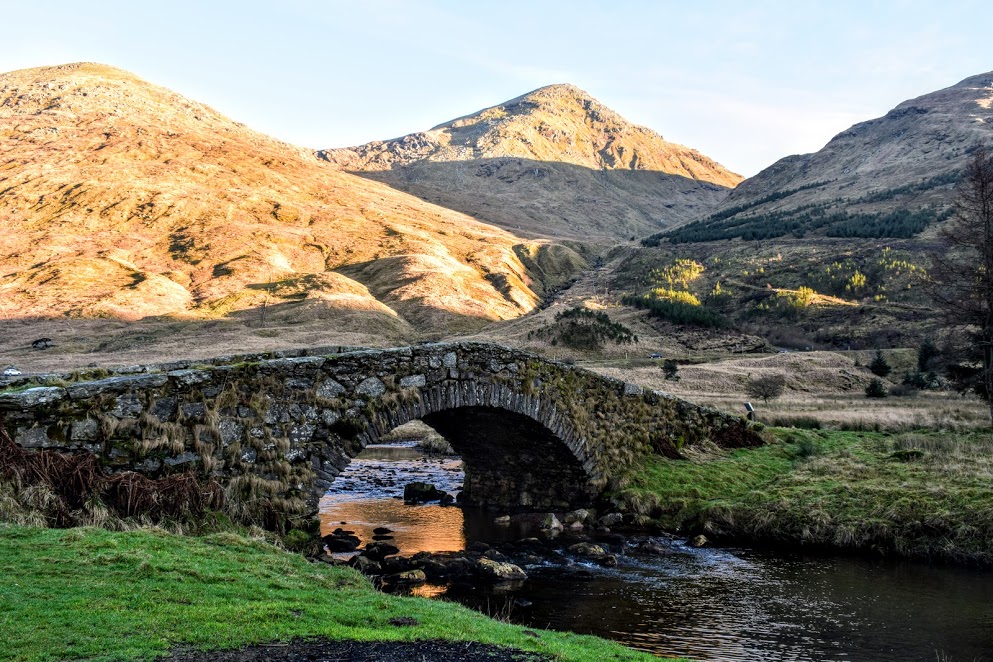 This route up Beinn Ime (1011 m / 3316 ft), the highest peak in the Arrochar Alps, avoids the crowded zigzagging footpath from Succoth. Starting at Butterbridge on A83, there is a burn to follow all the way to Glas Bhealach and although there is no path, the grassy slopes are easy going albeit steep at times. From the bealach it is a steep but short ascent to the summit, this time with a faint path to follow. The return leg brings you down the tourist route a short distance (boggy but gentle!) before you traverse across to Bealach a ‘ Mhargaidh and follow the burn down the glen on a grassy footpath back to the A83 at your starting point.

Car park just off A83 at Butterbridge. From Arrochar continue along A83, past the Rest and be Thankful and Loch Restil. The road then bends sharp left and after crossing the Kinglas Water there is a large parking area on the left.

Route: From the parking area turn right to walk along A83. Shortly after crossing the Kinglass Water look out for a style on the left leading towards some stone ruins. Follow a faint footpath up the Allt Beinn Ime burn, taking the opportunity to cross over at the earliest possible point. Keep the burn on your right all the way to Glas Bhealach at 740m. From the bealach head due South to ascend the steep grassy slope of Beinn Ime where a faint footpath begins to emerge as you gain height. From the summit cairn descend SE using the well-worn footpath (the normal ascent path from Arrochar). At approx 700m start a traverse round to Bealach a’ Mhargaidh. Follow the burn down the glen, keeping it on your right.  A faint footpath can be picked up and leads you back to the stone ruins you passed at the start of the ascent. Cross the style onto A83, turn right and follow the road back round to the parking area.

WOW! Best day in the hills in over a year! I knew it was going to be a good one when I could see the moon and stars in the sky when I left home, and had to scrape the ice off my car windscreen before I could go anywhere! Frost=clear skies=cloud free hills=views! Views: something we had yet to be blessed with on our adventures together over the past year. We had become accustomed to walking in full waterproofs and coming home wondering what the mountain even looks like!

The cloud we saw today was in a different league….. as we emerged through it and onto higher ground the scenery was simply breathtaking. There are no words which can quite describe the feeling you get watching the motion of the clouds beneath you: swirling around the glen, rising and creeping up the hillside like smoke ready to engulf you. It was magical; nature at it’s best. The three of us stood in silence watching (and filming 😉 ) the activity around us, and I felt a huge sense of awareness that I was experiencing something which most people never will.  Check out this video by @wgleb which is a snapshot of our day including a whole section on the cloud movement!

After a brief disagreement about which bealach we were heading for (too many navigators 😉 ) we set off on our course up to Glas Bhealach. I do like to steer clear of the tourist routes if possible, simply because I am selfish and want the hill to myself…. but at the same time I am a nervous wreck if I have to consider a route which might not have any path. Why? Lack of confidence when it comes to navigation.  I am working on it though, and the conditions today made it the perfect day to practice. Hence the OS map – which normally resides in my rucksack – swinging from my neck the whole day!

We didn’t meet a soul until we started our ascent from the bealach to the summit. A brief chat with the first guy revealed that he had come across from Ben Vane. I didn’t even enter conversation with the second guy when he passed us, such was my distress at the skintight lycra he was sporting on his legs! Eeek. Later when he was well out of earshot, I begged my two male walking companions to never ever dress like that on the hills…. ever. No, no and no! It’s just not a good look….

The higher we climbed the more the views opened up. Time to be a geek and try out my Peak Finder app to help solve any arguments around identifying which hill was which. We spent some time seeking out the Munros we had climbed together in previous months (seeing their summits cloud-free for the first time!) 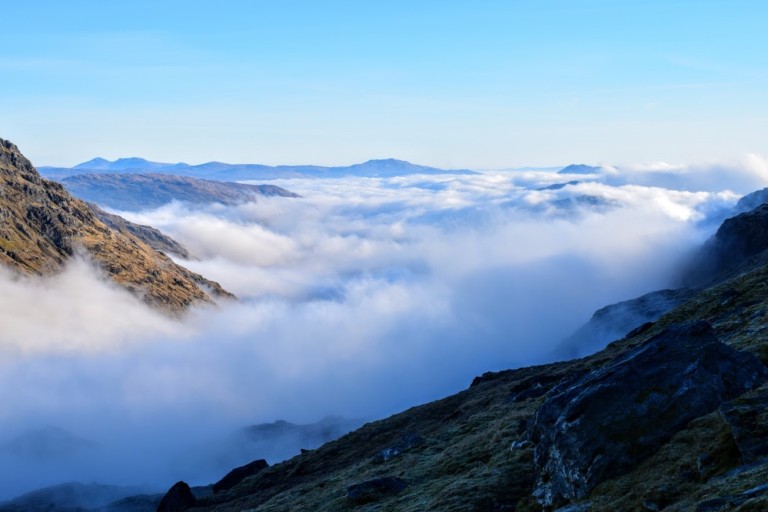 Reaching the summit it became clear how sheltered we had been all day, when out of nowhere we were hit with 30mph winds. It was not a place to hang around for long which was such a shame considering the incredible views from this vantage point. We contented ourselves with a few quick snaps before finding a large rock behind which to dine in shelter.

The path down the other side was visible from the summit, as were the great many hikers out enjoying it! We followed it down to around 700m at which point we started our traverse around Beinn Ime to reach Bealach a’ Mhargaidh. It was easy enough, if a little sore on the ankles, but interesting seeing Ime from it’s rockier angles. From there the final walk down the glen was pretty steep with one set of crags to look out for (we ended up coming down on top of them!) before we picked up a faint footpath running alongside the stream all the way back to the stone ruins seen at the start.