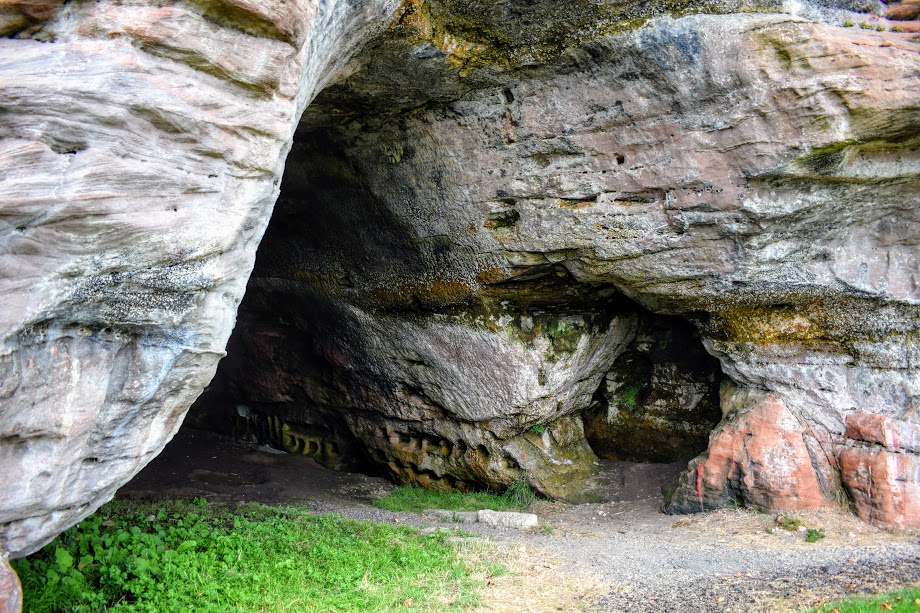 Along the Fife Coastal Path between West and East Wemyss there are two castles and a number of caves, as well as a memorial to Scottish musician Jimmy Shand! This circular walk lets you enjoy all of that before returning to the start via farmland tracks and a disused railway.

Route:  Start at the information board in the car park. Keeping the Firth of Forth on your right, follow the promenade along to a small parking area. Continue along the coastal path until reaching a set of steps leading to the ruins of MacDuff Castle. At the castle turn right to go down a set of steps to a grassy area. Turn left to pass some small caves and look out for a grassy footpath leading uphill to the left. The path crosses the centre of a field. Turn left at the top then right to the A955/High Road. Cross the road and follow the footpath straight ahead down onto a disused railway. Turn left and follow it along to a crossroads. Turn right then left up a set of steps. Turn left onto a tree-lined path running alongside a residential area. At a minor road cross over and continue straight ahead. The path narrows (can become  overgrown) and follows a burn to a bridge. Cross over and turn left – signposted “Path to Standing Stane Road and Coaltown of Wemyss”. Continue through the trees to some fields and at a crossroads turn right and follow the farm track along until a left turn – known as the Red Ash Trail – to reach Coaltown of Wemyss. Turn left onto A955/Main Street and take the first road on the right, continuing straight ahead after passing a row of cottages.  Keep right at a fork to follow a grassy footpath into West Wemyss. Turn left on Croftamorie and then right to follow the promenade back to the harbour.

There is a place called Wemyss in my native Ayrshire. Wemyss Bay to be precise – it sits on the coast just along from Largs and it’s where you go to take the ferry across to Rothesay. It is also the end point of the Ayrshire Coastal Path, all 100 miles of which I hiked in April. So when I found out that there was also a Wemyss in Fife, it had to be visited, especially that I was in that neck of the woods most Fridays. Wemyss is really hard to spell by the way – always get the ‘m’ and the ‘y’ mixed up!

West Wemyss, East Wemyss and Coaltown of Wemyss are all within close proximity to one another and are centered around Wemyss Castle. We saw a little bit of each during this walk. All former mining villages, my personal favourite was West Wemyss with it’s narrow cobbled streets and beautiful houses. 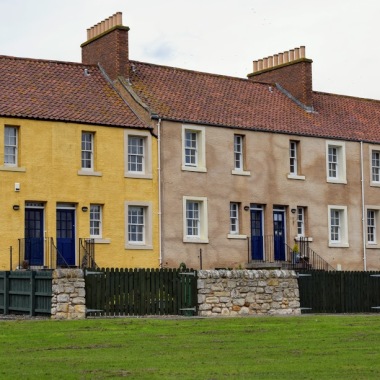 East Wemyss is home to many sandstone caves of different shapes and sizes. Unfortunately they were marked as dangerous and we therefore couldn’t go into them. Some of them were even being ‘held up’ by 80’s style red brick towers. However I understand that organised tours and an exhibition are available at the Wemyss Caves Education Centre.   What we could see of them was very impressive and I can only imagine what life must have been like for the people who used to call them home! The ruins of MacDuff Castle can also be found in East Wemyss, as well as a memorial to Scottish musician Jimmy Shand, who was born in the village in 1908.

Leaving the caves behind to begin the return leg of the walk, we quickly found ourselves crossing farmland and making use of a disused railway line and slightly overgrown burn-side footpath to reach Coaltown of Wemyss. The ‘Red Ash Trail’ became the source of much hilarity. I’ll try to set the scene….  The second half of the walk had been particularly muddy until now and Bodhi the 2 year old golden retriever we had with us was covered from head to toe.  I should add that he belonged to a friend and we would have preferred to return him in a presentable fashion. Therefore reaching the final couple of miles as we were by this point, we were looking for a clean burn or a stream for him. We were on a gravel farm track and reaching a crossroads, we could see Coaltown of Wemyss (where we were heading) straight ahead at the end of the track. The easy option would have been to continue straight ahead on this lovely, dry gravel track. However the route I was following told us to turn right, so that we could walk along the Red Ash Trail. My friend left the decision up to me and annoying as I am I was keen to see what it was all about so we turned right. Needless to say it turned out to be the muddiest part of the whole walk and Bodhi typically chose the worst parts to run through. The Red Ash Trail was a huge anticlimax – it was just a footpath made of red stones. Walking along it, we couldn’t help but laugh at the ridiculousness of the situation. “Look Lesley, you are walking on red ash, how exciting!!!”  Sorreeeeee!

Coaltown of Wemyss is the closest village to Wemyss Castle. The castle isn’t open to the public however you can visit it’s gardens during the summer months. Our walk took us through a small section of the former coal mining village before turning off back towards the coast.

Check out my other walks in the Kingdom of Fife >> HERE