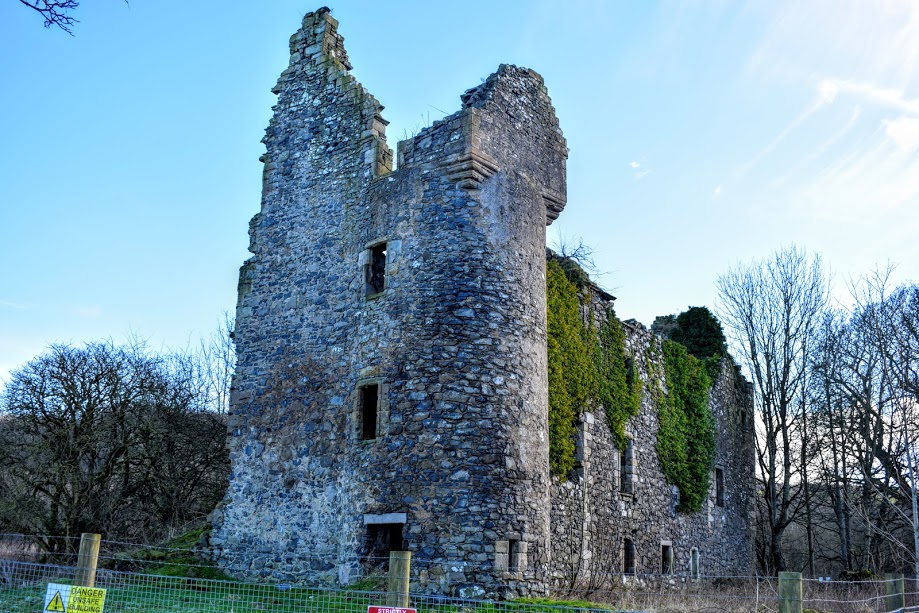 Wandering though this delightful woodland, the impressive remains of Old Auchans House seem to appear out of nowhere.  Now a category ‘A’ listed building, the mansion dates back to the 16th century and has been home to the Wallace, Cochrane and Montgomerie families over the years. There are two circular route options detailed below, both of which start and end at Dundonald Castle Visitor Centre.  Go late January to see snowdrops galore, April for wild garlic, and May for a sea of bluebells!

Car parking at Dundonald Castle Visitor Centre (KA2 9HD) Why not pay the castle a visit whilst you are there! 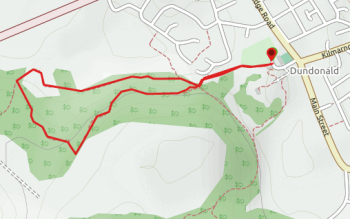 Route:  Behind the Dundonald Castle Vistor Centre you will find information boards about The Smuggler’s Trail and Auchan’s House. Follow the footpath from here along past the play area to a bridge. Turning right, there is a high path and a low path – take the low one and enjoy the walk meandering through the woodland. Arriving at Auchans House, take some time to look around before returning to the path. A little further on the path forks with the right side taking you to another, smaller ruin which you could pay a visit to as well. The path beyond it is closed due to quarry works so you will return to the main path anyway to continue. A steep climb awaits you after this point, but from the top if it’s a clear day you will have a wonderful view across to the Isle of Arran. ** After descending, the path forks and to follow route option one, take the left turn (downhill). This footpath will lead you back to the bridge you crossed near the start of the walk. Retrace your steps from here to the car park. 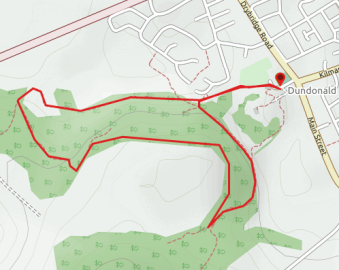 Route: Follow the route for Option One above until the ** then continue as follows: After descending the path forks, take the right fork (uphill). Note that this footpath can be very muddy and heads along the top of a steep embankment so care is needed if you have children or dogs with you.  You do get wonderful views across to Dundonald Castle from up here though! At the far side, you will reach a gate and should turn left downhill to join up with a wider track (The Smuggler’s Trail). Turn left on the Trail and continue along to reach the bridge you crossed at the start of the walk. Turn right to cross the bridge and retrace your steps from here to the car park.

This is the type of walk which leaves me wondering what other fascinating places exist around Ayrshire that I have yet to discover. What I first described as being hidden in the woods, on reflection becomes in fact extremely easy to access. You only have to know it is there in the first place!

My first experience of Dundonald Woods was back when I walked the Smuggler’s Trail, and I have returned several times since, almost always following the same route. It has plenty of interesting features inside: moss covered boulder fields, various types of fungi, wild flowers, and apparently also ruined 16th century castles….

The first route I tried was the longer, and in my opinion more challenging of the two. I was in a bit of a rush that day and found the last section really quite tricky underfoot due to lots and lots of mud which made the path very slippery. Most likely the speed at which I was attempting to complete the loop was part of the issue too! Having said that, it was definitely worth the effort because the path ran along the top of a steep embankment which offered the occasional fabulous view of Dundonald Castle and Dundonald Village below.  I returned a few weeks later with my husband and two young children to try the shorter option and experienced far less mud and generally much easier conditions all round. Without the views of course! So which option you choose really depends on how much you mind mud and whether you are willing to put up with some in order to have a nice view!

Speaking of nice views, I was rewarded with a magnificent view across the quarry to a snow-capped Isle of Arran on my first visit. Just magical! However, I hadn’t quite prepared myself for the almost vertical climb uphill to get to this viewpoint: a gravel path seemingly installed by Hillhouse Quarry Group. I could see it from a distance and told myself that it couldn’t possibly be the continuation of the route….. Um, yes it was. Options 1 and 2 both involve this climb; to avoid it simply walk from the car park to Auchans House and back the same way. Don’t say I didn’t warn you 😉

Old Auchans House was bigger than I had expected. Even more surprising then, that I had never come across it before! Metal fencing had been erected around it to protect the site and attempt to keep us safe. I loved how one wall, the most intact in fact, was covered in ivy. Perhaps all that was holding it together, who knows! The boundary wall of what would presumably have been the castle garden was still visible and I took some time to wonder about what life must have been like for the families who lived out here 500 years ago. Apparently it has not been lived in since the late 1700s when Susannah, Countess of Eglinton, passed away. If you are interested in reading more about the history of this former residence, you will find an information board next to the Dundonald Castle Visitor Centre.