A short linear walk through the aptly named Fairy Glen, near Rosemarkie.  Follow the Markie Burn to not one, but two pretty waterfalls hidden away in the most tranquil of settings. Fairly rough underfoot in places, with some steep climbs and several sets of steps. 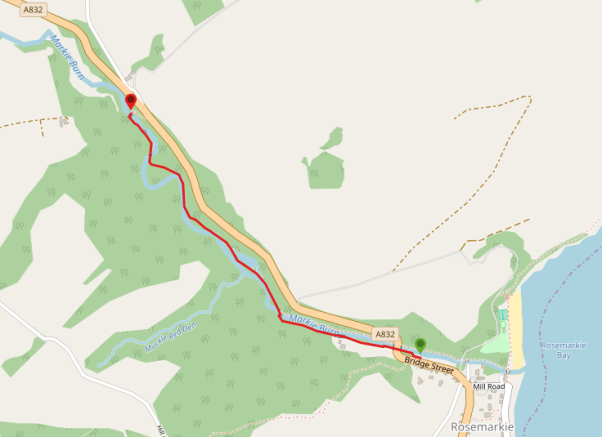 Route: Starting at the information board within Fairy Glen car park, follow the directional post for ‘Fairy Glen’ onto a footpath along the Markie Burn. There is only one path from here to the waterfall, so navigation is pretty easy. Return via the same route. Total distance there & back = 1.6 miles.

If it looks a little dull in my photos of this walk, that’s probably because we did it in the final 20 minutes of daylight, and being in a glen, by the time we were heading back to the car the areas with denser tree cover were pretty dark indeed! We were on a self-guided tour of waterfalls in the area you see, and this was fall number 3 of the day!  I imagine this place would look really spectacular on a sunny autumn afternoon, because even today at dusk it felt peaceful, and looked super pretty.

When I planned this walk I hadn’t realised that there were two waterfalls in the Fairy Glen so that was an added bonus. They were very similar to each other as you will see from the photos, each plunging over a vertical rock face of equal height into a little pool at the bottom – the sort you would paddle in during the summer months! Beautiful and impressive as they were, all of a sudden we were seemingly very hard to please:  compared to the two other waterfalls we had seen today – Falls of Mesasch at Corrieshalloch Gorge and Rogie Falls, these two felt like trickles. Amazing how quickly one becomes complacent! Any other day and this place would be immediate Instagram and selfie material!

It is a place I would love to go back and spend more time in – a little gem of nature!